From The GenGIS wiki
Jump to navigationJump to search 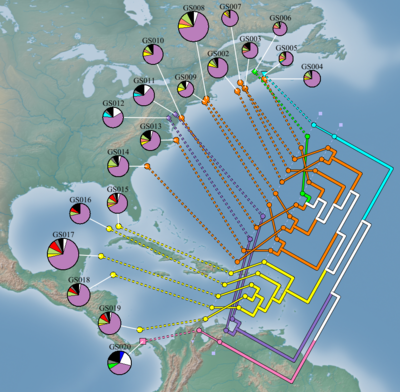 Biodiversity of 19 marine metagenomes from the Global Ocean Sampling expedition.

GenGIS (pronounced 'Gengis' like with two hard 'g's) is a bioinformatics application that allows users to combine digital map data with information about biological sequences collected from the environment. GenGIS provides a 3D graphical interface in which the user can navigate and explore the data, as well as a Python interface that allows easy scripting of statistical analyses using the Rpy libraries.

Below you can find information about the software, data sources, tutorials, and the manual.

You can visit the gallery to see examples of what GenGIS can do visually. For an overview of different analyses GenGIS can carry out, please visit the plugins page.

GenGIS 2.5.3 has been released! See What's New for details.

We are building a gallery of example applications using GenGIS, including tracking of the 2009 H1N1 outbreak and the spread of HIV-1 subtype B in Europe.

Please cite GenGIS if you use it in your work. Currently the best citation for GenGIS is:

Other papers and conference proceedings related to GenGIS:

GenGIS is in active development and we are interested in discussing all potential applications of this software. We encourage you to send us suggestions for new features. Suggestions, comments, and bug reports can be sent to Rob Beiko. If reporting a bug, please provide as much information as possible and a simplified version of the data set which causes the bug. This will allow us to quickly resolve the issue.

The development and deployment of GenGIS has been supported by several organizations:

The text of this website is available for modification and reuse under the terms of the Creative Commons Attribution-Sharealike 3.0 Unported License and the GNU Free Documentation License (unversioned, with no invariant sections, front-cover texts, or back-cover texts).